HOPE Outdoor Gallery is an outdoor graffiti mural gallery in downtown Austin, Texas aimed at building community through art. I took these images to accompany an article that I wrote for Austin.com titled “Graffiti for Hope.” Taken with a Nikon D7000 camera and accompanying 16-85mm f/3.5-5.6 lens. 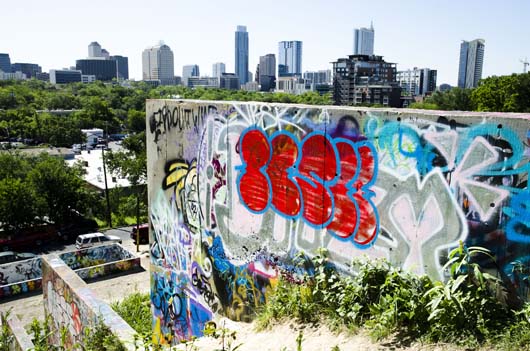 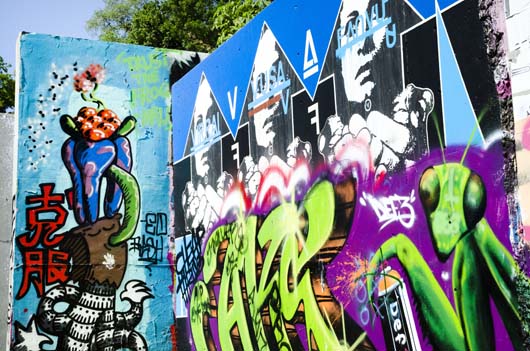 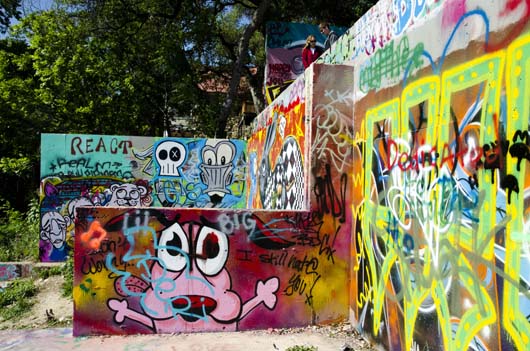 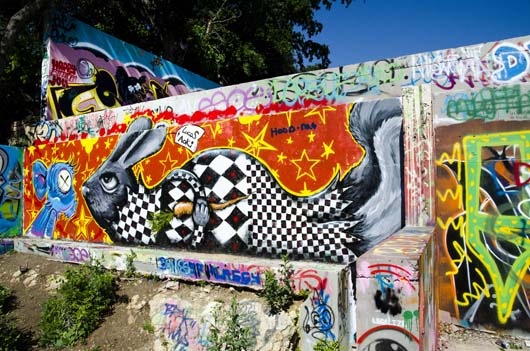 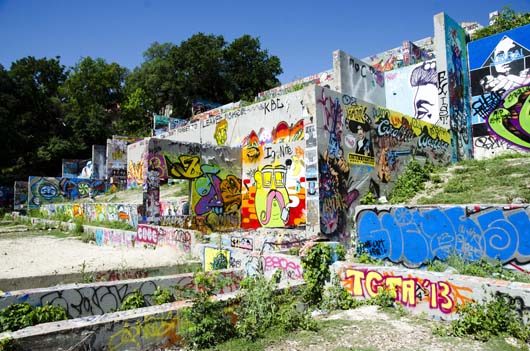 I took these photos to accompany an Austin.com article about haunted locations in Austin, TX called “Haunted Austin: 5 Places Where You Might See a Ghost.” Me and my two companions were most creeped out as I shot the Littlefield House and the Austin Pizza Garden. The photos are much sharper at full size. Click each image to enlarge. I took all of these shots as long exposures with a Nikon D7000 and 18-55mm f/3.5-5.6 lens. 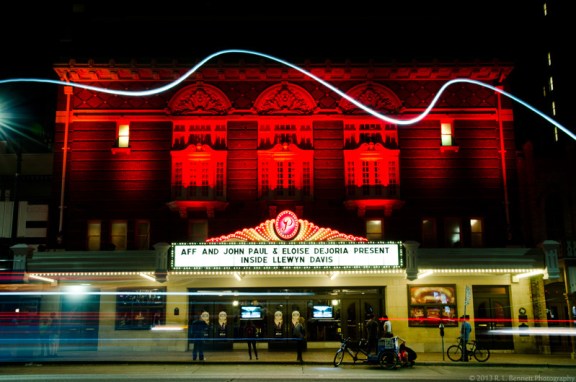 The Paramount Theatre on Congress Ave in Austin, TX. The theatre is supposedly haunted by the ghost of Walter Norris, the beloved projectionist who died during a showing of Casablanca. As long as employees bribe Walter with candy bars and chocolate donuts, equipment in the projectionist’s booth runs smoothly. 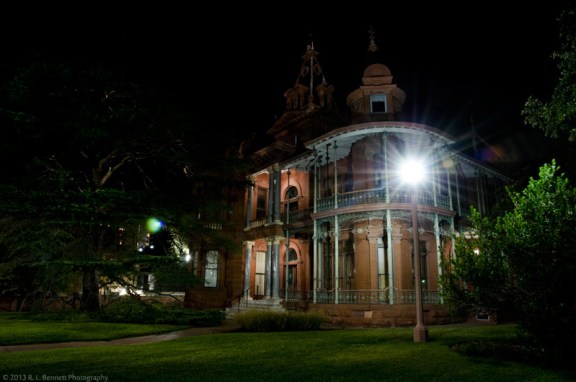 The Littlefield House on W 24th and Whitis Ave at the University of Texas in Austin, TX. The house is supposedly haunted by the George Littlefield’s wife, Alice, whom he kept locked in the attic. Apparently, Alice can be seen pacing around the attic and staring out of its windows. 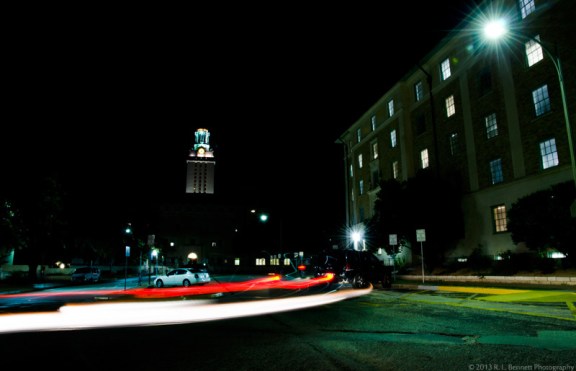 UT Tower at the University of Texas in Austin, TX. The tower is supposedly haunted by the ghost of the construction worker who slipped from one of the upper stories and fell to his death, by the ghosts of the nine students who have committed suicide since the tower was constructed, and by the ghost of Charles Whitman, the student and ex-Marine responsible for the 1966 shooting massacre at UT. 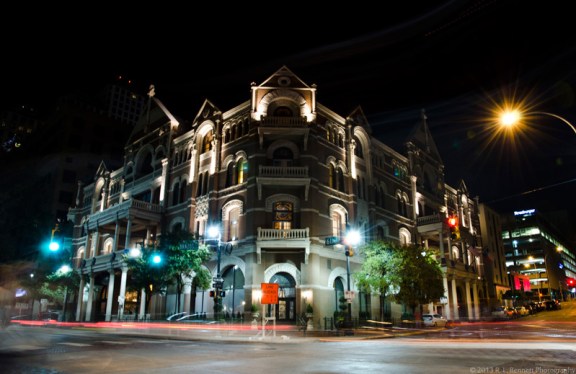 The Driskill Hotel on 6th Street in Austin, TX. The hotel is supposedly haunted by owner Colonel Driskill, a little girl who died on the stairs, three “suicide brides,” a Depression-era manager, a Victorian-era clerk, a railroad ticket salesman, and an old security guard. The hotel also contains two haunted mirrors. 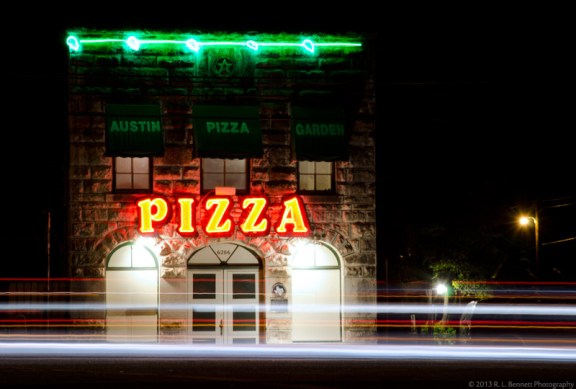 The Austin Pizza Garden on Hwy 290 in Austin, TX. The restaurant is supposedly haunted by a mischievous poltergeist who locks doors, throws silverware, scoots chairs across the floor, talks to guests but disappears mid-conversation, stomps around the second floor, and afflicts people with nausea, among other things. 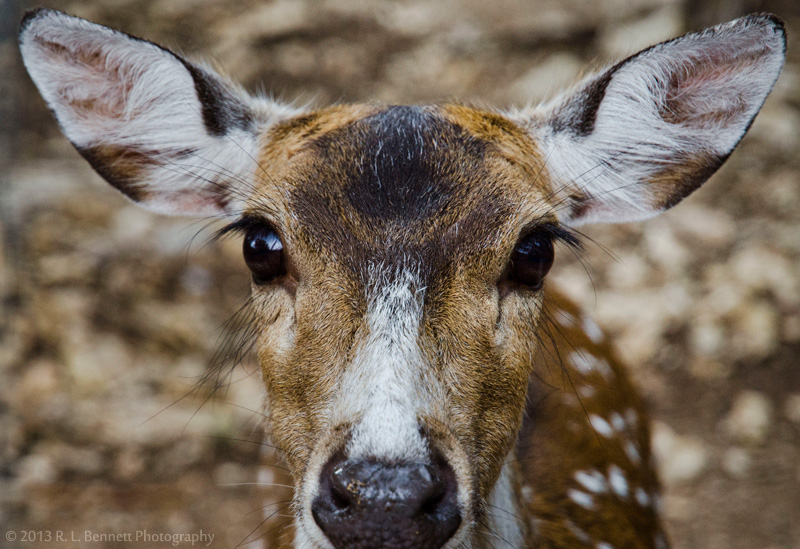 I visited a small rescue zoo called Austin Zoo & Animal Sanctuary this past weekend. It was raining pretty hard by the time I got around to the Axis Deer enclosure, but the way this lovely little doe was looking at me, I knew I had to get a shot before I fled for cover. As I inserted my lens through the fence to get a decent shot, she was kind enough to stare down my camera and brave enough to hold her ground as I edged closer and closer. You can see and read more about the animals I encountered at the zoo here. Taken with a Nikon D7000 and 18-55mm f3.5-5.6 Nikkor lens. Click image to enlarge.